Continual prayer is always appreciated. After all, we are in HAITI.

Prayer Request 1/22/2013:
Second prayer request: Today, Jan. 22, while walking home from the market, we stopped by to say hello to Mdm. Geania. Many of you have met her. Anyway. As soon as Richard greeted her, she fell into Richard’s arms sobbing. We got Smith to ask what had happened and she had just found out that her husband, that had been in the hospital had died. She was devestated. Richard, Pst. Dave, Smith and I laid hands on her and prayed for comfort and strength. We go back a long way with this wonderful lady, since 1998. As much as we disagree with the Haitians customary funeral procedures, this is one lady we will want to help. Mdm. Geania is the lady on the side of the main road, not far from our house that has a little store set up. Years ago we would stop by there and get a soda after walking the market to cool off. If any one would like to contribute to this fund, mail to: Feed My Sheep, P.O Box 341 Bell, Florida. 32619 earmark: Mdm. Geania 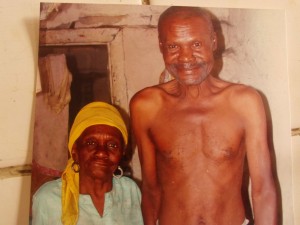 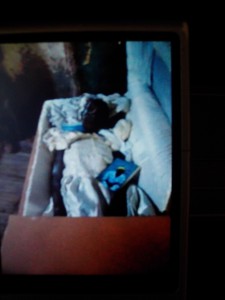 Zeen went to be with the Lord on 10/6/15 and her husband is still not well. Please continue to pray for him  and for their grandson, Franscois.

Anyone wishing to help with Zeen’s final expenses can donate through the Paypal link or make checks payable to Feed My Sheep, mail to :  P.O. B ox 341   Bell, Fla.  32619 and add the memo “Zeen.” 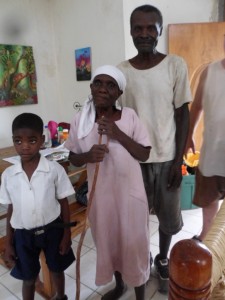 Update July 2014:
* After we returned to Haiti last Fall we learned that there was more to Zeens story. Much more. As Zeen was returning home from taking Francious to school the reason she was hit by the motorcycle was because she was pulling a small child out of the way to prevent them from being hit and injured or even worse, killed. Zeen not only suffered tremdously, she risked her life for another. No greater love than this. Zeen is a true HEROINE. Even with the doctors saying she would probably never walk again, 6 months after the accident and 8 days in a coma, Zeen and the family walked a little more than a mile to tell us good bye before we left for the states. We serve a mighty God!

1/22/2013:
This is Zeen, Ifodi, and Francious. Many of you that have come to Haiti have met Zeen and her grandson or at least heard their story. On Thursday Jan. 17th Zeen had just walked Francious to school and dropped him off. On her way back home, she didn’t seen a motor cycle coming when crossing the road. She was hit by the motor cycle and a small Tap Tap truck was right behind it and ran over her. Smith got the police and he rode with her as they took her to the Pierre Payan hospital. We immediately gave him money to help start medicine and care. She lay unresponsive for several days. We’ve been getting good reports the last couple of days. Yesterday afternoon Ifodi told Richard she was sitting up some, talking and eating. Praise the Lord!! Zeen is not out of the woods yet. She still needs much prayer for a complete and speedy recovery. Any one wishing to help with these medical needs you can send them to Feed My Sheep, P.O. Box 341 Bell, Florida. 32619 and earmark: Zeens Medical. Thanks for all the prayers already sent. 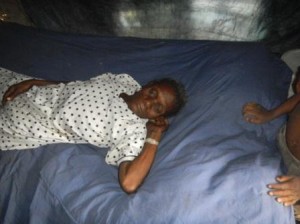 1/31/2013:
This is Zeen just getting home from the hospital. Recently she was hit by a motorcycle while returning home from taking her grandson to school. Right behind the motorcycle there was a small TapTap truck that ran over her. She was rushed to the hospital where she began a series of medications, IV’s and observation. She was comatose for several days. After much prayer, she woke up, began to talk, and a few days later began to eat food. She is a small frail lady and will have a long road to complete recovery. Please continue to pray for her. 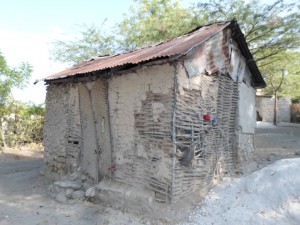 This is another praise report of how God works things out. When the St. Pauls team from NJ were in Haiti to finish Ramones house and seeing that circumstances had changed with the unexpected death of Mdm. Ramone, they had extra money and they were able to spread the love to others. As you can see, the house that Zeen, her husband and grandson Francious had was not only an Adobe, but one that was literally falling apart. 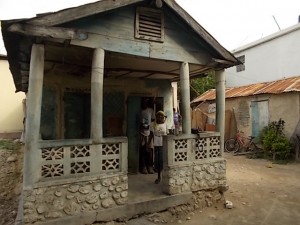 With the extra money the team had, they paid a years rent on this house. A two room sturdy house. It may not look like much to us as Americans, but to this extremely poor family it is a mansion. PTL and thank you St. Pauls UM. 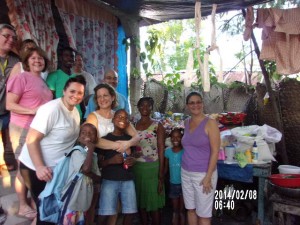 **It’s like the story from the Bible of woman’s flour barrel, or Jesus feeding the 5000 with 3 fish and 5 loaves of bread. It just seemed that the funds that St. Pauls UM brought with them to finish Ramones house just seemed to spread the good to many more. This picture is at Lomisias house. Jerry and LoLo’s mother. Lomisia had a nice business in her yard consisting of just about anything the Haitians need for their daily living. Just before the team arrived, Lomicias house was broken into and all her savings stolen. She was out of business and devastated. It was put to the team for discussion and they agreed to give some of their extra funds to Lomicia so she could restart her business. PTL and thanks St. Pauls.